The history of the Antech wine company began more than six generations ago in Saint-Hilaire (near Carcassonne in the Aude département) where the Tisseyre-Limouzy families began to cultivate a vineyard which flourished over the years. In the beginning of the 20th century, Eugénie Limouzy became one of the first women in the Languedoc to manage a vineyard, relentlessly striving towards methods to improve vine growing. Françoise Antech-Gazeau joined her father and uncle in 1996 to take over the management of the Antech Estate. For over ten years, she has succeeded in the challenge of perpetuating the Antech style by focusing on demanding methods of production and creativity in design and packaging to ensure the future development of the company with the support of Georges and Roger. Wine making, tasting, assembling, sampling, marketing, commercial development, sharing of experience, and persuasion add up to their continual, long-term commitment. Sound agricultural methods, a strong dedication to sustainable development, and the improvement of cellar hygiene have been day-to-day practices of the Antech company, even before methods or rules were imposed by official authorities. From generation to generation, the Antech company has always given priority to a culture of excellence, rigourous methods, authenticity, and quality. Today, with over one million bottles sold in France and abroad, Antech follows constant innovation while the company respects tradition in order to bring together pleasure and fantasy. Under the company's logo of a Cathare chateau, the Antech family asserts its independence, its identity, and its tireless pursuit of excellence.
Reviews 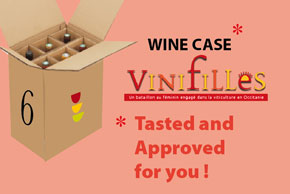